Art museums in small cities are uncommon. Through the exceptional efforts of generations of artists, art lovers and patrons working over a period of nearly 100 years, the Kitakata City Museum of Art opened its doors in April of 1995.

The beginning of this story starts in the early Taisho period (1912-1926). The Taisho and early Showa (1926-1945) era of the first half of the twentieth century was a period of cultural and artistic awakening for Kitakata. Patrons hosted painters and artists in their homes while promoting the exhibition and sales of their works.

In January 1918, a group of patrons and artists established the Kitakata Art Club with the intent of opening an art museum in the city. Although the club later disbanded, its successor organization, the Kitakata Art Association, won approval in 1991 for the establishment of an art museum, as part of the city’s plan to preserve local architecture and history. Known as the Kitakata City Collection Relocation and Reconstruction Project, it consolidated significant landmarks in a historical park, with the Kitakata City Museum of Art as a cornerstone.

Construction of the main exhibition hall began in 1992, while the remaining structures were completed in November of 1994. Extending the theme of the historical park, the museum is in the style of a traditional brick storehouse from the 19th century. Specifically, it was modeled after a farm storehouse in the Mitsuya district, Iwatsuki-machi of Kitakata City.

Art and culture unite us across time. The past is part of our present and will be a part of our children’s future. Although the original pioneers of the Kitakata Art Club were unable to see the realization of their aspirations, the Kitakata City Museum of Art, its trustees and staff endeavor to continue their efforts to expand artistic and cultural opportunities to the community.  (Editing / Aizu KitakataInternational Association 2021.3.5) 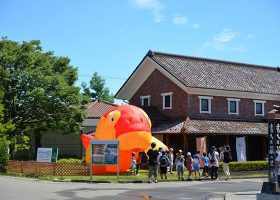 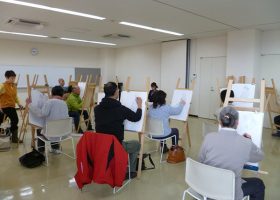 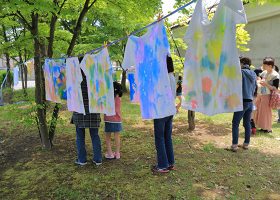